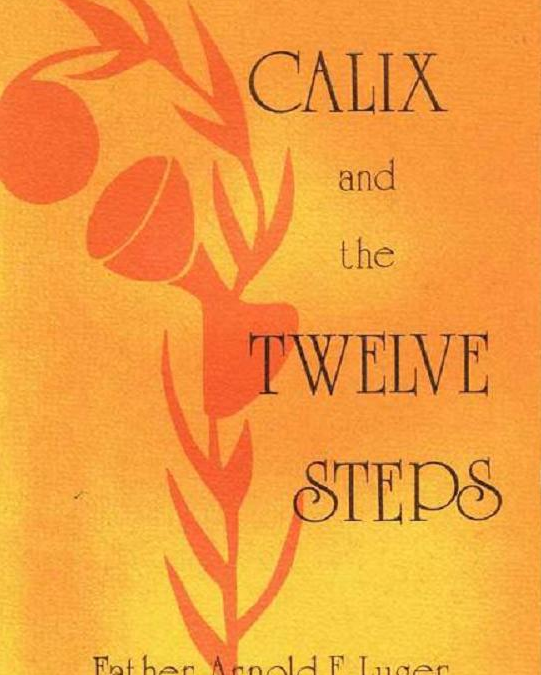 “Calix is an association of Catholic alcoholics, drug addicts, and family members and friends affected by addiction, who are maintaining their sobriety through participation in their Catholic faith and a 12 Step program.

Our conversation and our association together should be a source of inspiration and encouragement to each other, geared to our growth toward spiritual maturity.
Our participation in all other spiritual activities of Calix, such as the frequent celebration of the Liturgy, reception of the Sacraments, personal prayer and meditation, Holy Hours, Days of Recollection and retreats, aids us in our third objective, namely, to strive for the sanctification of the whole personality of each member.” [This CREDO is read at the beginning of each Calix meeting.]

For some time I’ve been searching for ways to integrate my faith as a Catholic with my 12 Step Program.¹  For those unfamiliar with the 12 Steps, please refer to the footnote links.   One important feature of any 12 Step program is the importance of a “Higher Power.”    For example, Step 2 reads “Came to believe a power greater than ourselves could restore us to sanity.”  Step 3 reads “Made a decision to turn our will and our lives over to the care of God as we understood Him.” [emphasis added]

In order to enable agnostics and atheists to take part in AA, Bill Wilson, one of the two founders of AA, decided to emphasize the “God as we understood Him” definition of AA’s higher power.   He made this decision even though he came to sobriety as the result of a religious vision and received advice during the early years of AA from Fr. Dowling, a Jesuit priest.

When I entered a 12 Step program in 1992, I was not satisfied with this loose characterization of a “Higher Power.”   According to 12 Step literature, the Higher Power could be God in a variety of forms: the 12 Step program itself, or the people in one’s 12 Step Group, or ????.   Indeed, in some 12 Step group meetings I’ve attended, people have protested against saying the Lord’s Prayer at the end of the session (this prayer is said in the Men’s Group meeting I attend weekly).

My dissatisfaction with the looseness of a Higher Power, as officially promulgated, in fact led me to the Catholic faith in the early 1990’s.    But that’s another story.  The closing of meetings and Masses during the current covid-19 lockdown prompted me to search for online 12 Step groups.  There are a host of these;  with many I can certainly identify.  (I’ll leave it to the reader to guess which.)   However, after attending a few online meetings for some of these programs, I didn’t find them fulfilling. So I did a more selective web search and came across the Calix website.

There are many face-to-face Calix meetings given on their website, but the closest required a four hour round trip drive.  Moreover, like various 12 Step meetings, Calix face-to-face meetings have been closed during the current lockdown.  I also learned that Calix held online meetings, attended one such, joined the society and have been attending four or five each week.²

There are usually anywhere  from 8 to 30 people attending each meeting, mostly men, with three or four women.  Most are from AA, but a number are from 12 Step programs other than AA.   Almost all are Catholic and all are Christians.   The meeting formats vary, but they begin and end with the Calix Credo and prayers taken from either the Calix prayer book or other Catholic sources.  There is an integration (for which I’ve long sought) between the 12 Step teachings and Catholic faith.

The Calix website gives a more complete description of what Calix is all about.  It’s said better there than I could put it in my own words.  Also, I hope that you readers—alcoholics, addicts, codependents, whomever—who have been looking for resources to aid in recovery will look into Calix.  I want to emphasize that Calix is not a 12 Step movement but builds on that to integrate our Catholic faith with the 12 Steps. Both are needed.  As a friend of mine put it, when asked why the 12 Steps were needed for recovery, rather than just a reliance on the Catholic Church:

“Alcoholism [substitute addiction, overeating, codependency, gambling,….] is a disease.  You don’t ask the Church to cure you from cancer, without going to a doctor, even when you pray for remission.  You need the 12 Step program and the people in it.”

Again, you should understand that Calix does not presume to be a 12 Step program for recovery;  here’s a quote from the website: “only when, the recovering person achieves some measure of sobriety is he or she ready for Calix.”  As one member of the Calix Society put it:

Full recovery for the faithful Catholic depends on faith in a Higher Power that has to be the Trinitarian God—The Father, The Son, and The Holy Spirit.  Therefore Calix adds in an essential way to the 12 Steps. They become much more meaningful and powerful when interpreted in terms of our faith. There is a synergy operating here.

I’m not a good enough writer to give the full flavor of these Calix online meetings. This old man’s memory is too flawed to recount the meaningful sharing.    But let me repeat: the Twelve Steps and Catholic teaching reinforce each other. Each becomes more meaningful when Gospel readings and readings from other Catholic sources are interpreted in terms of the Twelve Steps and vice versa.

*This article was originally published in the blog, “The American Catholic,” with the byline “A Friend of Bill W.”   I thought it would be a good starter for the new edition of the Calix Society website blog.